Blog: Improving the LEAs vision of the criminal scene

We have seen Augmented Reality (AR) as a gaming tool, it became a hit thanks to “Pokemon Go” kind of games, but who would have thought that this technology one day could be used in such serious use-cases?

AR is finding its way into all sorts of existing industries, and now the ground breaking technology is helping law enforcement to solve crimes.

Last year Hollywood producer and broadcast journalist, Neil Mandt, launched “CrimeDoor”, a unique AR-based app delivering visually immersive True Crime experiences that "open the doors" to real crime scenes. When users open these doors to the spatial web they are brought into virtual experiences that recreate the scenes detectives encountered when they originally arrived. Created with the dedicated True Crime fan base in mind, the app will launch hundreds of profiles that contain in-depth, curated, unbiased news and information related to famous as well as small town murder and missing person cases around the world.

For the first time ever, police and detectives can revisit a murder scene without any distractions or time limitations. Former detective and cold case investigator Paul Holes, who helped crack the Golden State Killer case, calls CrimeDoor "a game changer for cold cases around the world."

On the other hand, crime scene investigation and preservation are fundamentally the pillars of forensics. On the streets, officers and investigators are able to capture crime scene evidence immediately and then transfer the case files remotely so that others on the case can access them right away, creating a more efficient and collaborative work flow among law officers and investigators. This makes investigations more efficient and cost effective. Numerous cases have been discussed where mishandling of evidence or improper investigation leads to lengthy trials and, even worse, incorrect verdicts. Whether the problem is lack of training of first responders or any other scenario, it is essential for police officers to properly preserve the evidence. A second problem is the criminal profiling since each agency, and even departments within it, has its own method of storing information about criminals.

AR intends to digitally transform the way police combat crime. It will allow police officers to create a copy of the scene of crime so that it can be presented in courts or in forensics labs. It will be in the form of wearable glasses for officers on site whereas officers during training will be wearing a headset. The trainee officers will be provided with simulations of cases which have already been resolved. Officers on the scene would be provided with intelligence about the crime and the suspect they are interviewing.

Processing a crime scene can be grim at the best of times. Collecting all physical evidence at an incident location is a really long, troublesome process that requires great effort, focus, and concentration. Currently, most of this is a manual process: a police/investigating officer needs to secure the scene safely and collect all the evidence, as with the passing of time, the state of the scene changes. Given that this is a human process, sometimes mistakes may be made and in such cases there’s a chance that a criminal can escape a sentence.

The investigators are exploring XR (AR/VR) tech for mapping out the crime scenes, scanning, and regenerating the scene in 3D environments. It also helps them to come to a conclusion quickly and effectively. Nowadays technology such as machine learning and AI is empowering computer vision, to work a more detailed analysis, and predict and match the results.

Once the crime scene has been mapped out, it can then be easily shared with other officers or investigators without having to physically meet, and the scene can be recreated in any location in full detail.

Advantages of AR tech as Forensic Tools include:

Through security monitoring in the crowded areas, front line police officers can benefit from more accurate information exchange between teams of security agents, thereby contributing to the team’s improved situational awareness (understanding of one’s environment). This will be achieved by ascertaining the precise location of incidents, objects and people with a very low tolerance for error. By incorporating powerful activity recognition and visual segmentation capabilities, ground personnel can be directly made aware of unattended or dangerous objects, the number of people in a crowded space, each person’s precise positioning and orientation in the scene, and whether they’re engaging in unlawful activity. As such, the augmented reality wearable devices can be configured to highlight specific features after performing image analysis, thus enabling security control teams to more quickly obtain knowledge of the situation, make better decisions based on enhanced situational awareness and more efficiently address specific tasks.

A variety of scenarios where AR could be very useful are:

In addition to these, AR technology has been used as a tool for supporting collaboration between the rescue services, the police and military personnel in a crisis management scenario.

It seems that AR is especially suitable to support this goal, as it allows for independence and individuality. This means that each actor can independently have data tailored to their needs in various situations. AR also supports cooperation as the actors can see each other and cooperate in a natural way.

In short, AR will likely have a useful place in the field of forensic science, allowing professionals to recreate a crime scene for others to analyse, to communicate and collaborate remotely and in complex situations. 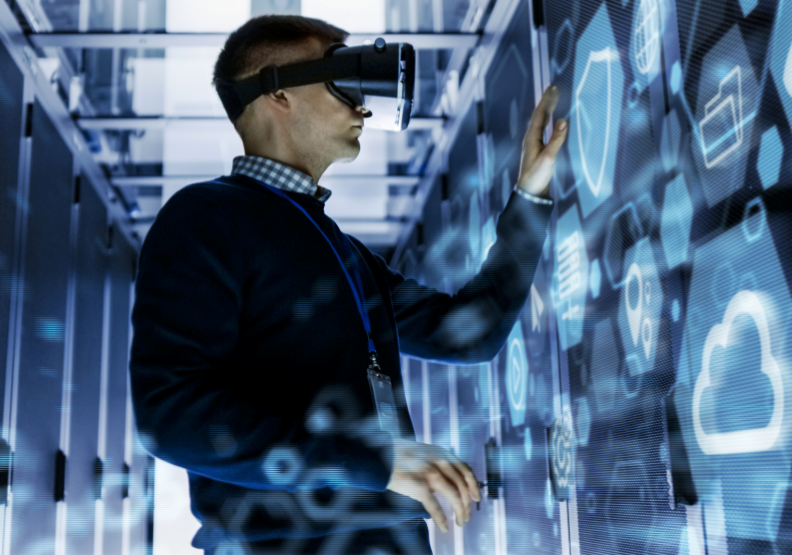